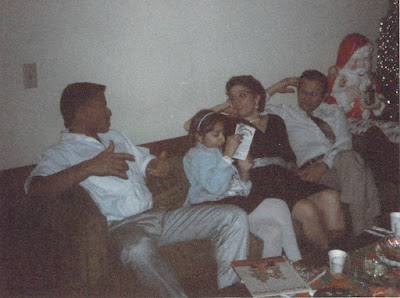 This was pretty typical of me at a certain age (by which I mean all the ages including now…). I believe that is a Sweet Valley High book I was reading. We’re at a Christmas party, and my mom and stepdad are engrossed in an actual conversation which I was trying very hard to ignore.

In all seriousness, this was a Christmas party I loved to go to as a kid, at the house of one of my mom’s former teachers from Gardena High School, Richard Cody. We used to attend annually, driving from our home in the Inland Empire to their house in Santa Ana. In my role as endless, annoying fountain of Christmas spirit from July onwards, I was dazzled by something as simple as the taillights of the traffic on the 91 freeway, festive ribbons of red and white that were probably making my parents cuss under their breath.

Richard Cody and his wife had a huge network of extended family and friends, former students, children biological, foster, and adopted, and so on and so forth. We’d enjoy Christmas carols around the piano (often with me or my mom playing), orange sherbet punch, and a reading of The Night Before Christmas that culminated in Santa coming down the stairs and handing presents out to all the kids. When I was little, Santa was this really tall man named Benjamin, and then his son Malik inherited the post–that might be him on the left in the picture, or possibly his brother Ibi. (Clearly nobody was alarmed by Santa suddenly changing from white to black in the space of a year.)

That diverse cacophony of names, though: Malik, Ibi. Their mom Twyla. Erlene, Richard’s wife. Ted and Ariana, their biological kids. Moises, Marcos. Plenty of others I don’t remember. It was a music, just as much as the notes from the piano; a very SoCal music. The Codys’ expansive and generous social circle taught me a lot about the diversity of where I lived.

This would probably be a good December post, but in keeping with my childhood singing of Christmas carols at any given time of year, I’m posting it now.