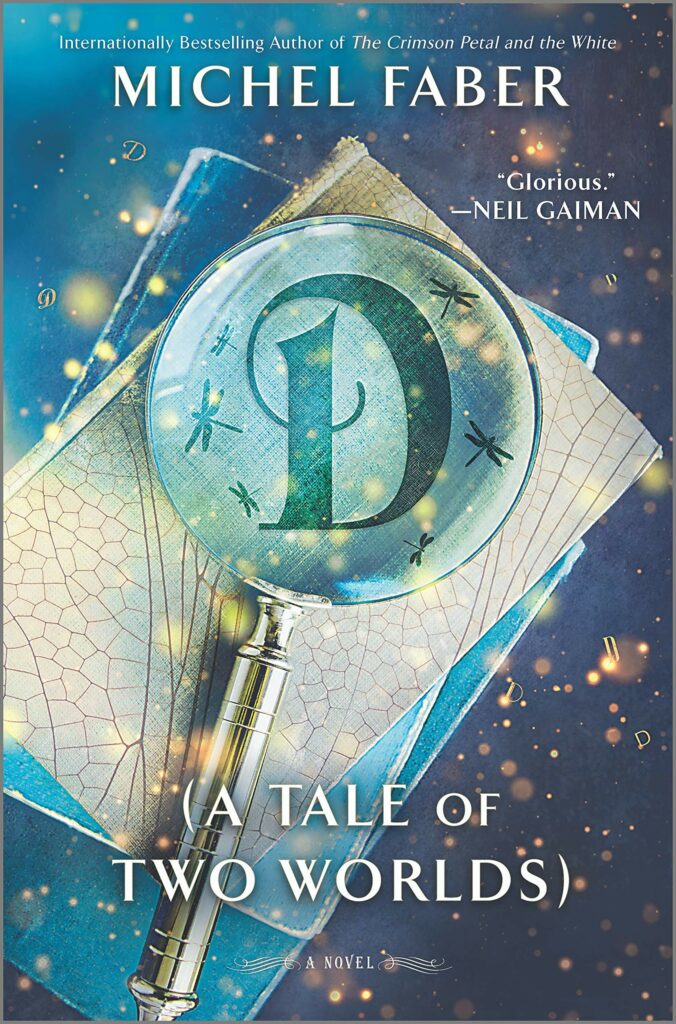 I’d been meaning to read D: A Tale of Two Worlds by Michel Faber since hearing about it on NPR (interview with the author here). I thought the premise sounded really intriguing–one day the letter “D” just…disappears from everywhere, and pretty soon some of the actual objects that start with D begin to disappear, too. As it turns out, the Ds are not just disappearing, but being stolen, abducted to the odd and sort of magical land of Liminus.

If you read/listen to the interview, there are a lot of deep concepts that the author delves into, besides the nature of language and how it affects our experience of the world–the main character, for instance, 13-year-old Dhikilo, is a liminal sort of person herself. She’s from the not fully recognized country of Somaliland–not to be confused with Somalia, but that’s a mixup people constantly make when talking to her. She was brought to England as a baby, so she’s English, too, but as a multicultural person, inhabits a very specific borderland that’s neither the one nor the other. Her companion on her adventure is also more than what she seems: a Labrador retriever who also happens to be a sphinx.

With such thoughtful, even cerebral, underlying ideas–and the author’s own admission that he looked to Dickens and Thurber for some of his inspiration, I expected this to be a highbrow literary fiction experience. Ultimately, though, it was much more than that–more whimsical, odd, and humorous, and definitely something that young readers would enjoy just as much as adult readers. Though the author also acknowledges a debt to Narnia and Wonderland, I also got a strong feeling of likeness to Gulliver’s Travels as well as more modern journeys to magical lands, like Oz, or The Phantom Tollbooth, and even a hint of Discworld humor. In particular, I kept thinking about The Phantom Tollbooth because it too shares a love of language and words, from the short and pithy to the elaborate and (to quote from D: A Tale of Two Worlds) grandiloquent. The writing is clear and vivid, not overwrought; the absence of the letter D isn’t overplayed; and the story of Dhikilo’s adventures in Liminus is imaginative and fun, complete with quirky and odd inhabitants that both help and hinder her along the way.

I do feel compelled to note that while the main character is a girl of color, the author is a white male. I didn’t find it problematic since he’s not attempting to speak “for” anyone, or over anyone. Others’ opinions may differ; your mileage may vary. Speaking for myself, I thoroughly enjoyed the book.