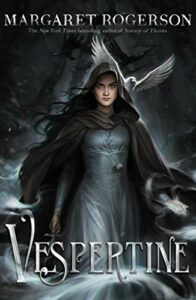 One of Margaret Rogerson’s earlier books, Sorcery of Thorns, was a finalist in a previous Cybils Awards year, so I was eager to read a new book by her, and Vespertine not only didn’t disappoint, it ended up being the category winner for 2021. From the jacket copy (which provides a much better summary than I could):

Artemisia is training to be a Gray Sister, a nun who cleanses the bodies of the deceased so that their souls can pass on; otherwise, they will rise as ravenous, hungry spirits. She would rather deal with the dead than the living, who whisper about her scarred hands and troubled past.

When her convent is attacked by possessed soldiers, Artemisia defends it by awakening an ancient spirit bound to a saint’s relic. It is a revenant, a malevolent being whose extraordinary power almost consumes her—but death has come, and only a vespertine, a priestess trained to wield a high relic, has any chance of stopping it. With all knowledge of vespertines lost to time, Artemisia turns to the last remaining expert for help: the revenant itself.

This was my personal favorite of the group—intriguing premise and world-building, and a page-turning adventure with plenty of twists and turns. The story also had really good creepiness and a reluctant yet relatable heroine. I wanted to see Artemisia succeed, to find her own inner strength so that she could fight for justice for herself and her world. I also enjoyed watching her open up to unusual and unexpected friendships and allies.

For those who enjoy historical (or, anyway, historical-ish) fantasy–particularly if you enjoyed Robin LaFevers’s His Fair Assassin books–I highly recommend this one. The action is non-stop, but even better, the character is constantly thrown into difficult circumstances that test her tenacity, morality, and even her humanity.