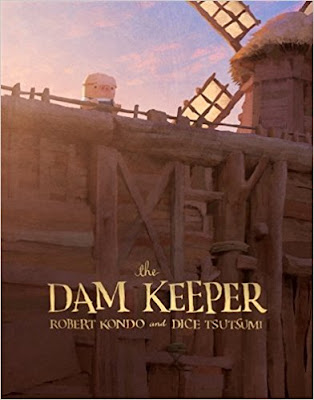 Synopsis: I found out during Cybils deliberations that The Dam Keeper originated as an Oscar-nominated short animation, which makes me sad that I missed it. While I was growing up, I was a big fan of the Spike and Mike Festival of Animation, which introduced me really early on to faves like Nick Park/Aardman Animation and Pixar, now a household name. I’m guessing The Dam Keeper would’ve been right at home in that arena—and, in fact, both of the authors have worked for Pixar, so there you go.

Pig, who lives in Sunrise Valley, has a really important job he inherited from his father: he’s the Dam Keeper, and he’s responsible for keeping back the deadly black fog that threatens from outside the valley’s walls. Unfortunately, he’s been alone for a while—ever since his father inexplicably left and walked right out into the fog. And now, there’s a huge wave of black fog on the horizon, and it’s up to Pig, his best friend Fox, and the bully Hippo to figure out how to stop it.

Observations: This story’s very cute animal characters will appeal to younger readers, but the touch of darkness to the storyline will broaden its age range—there’s a depth of emotion here that doesn’t shy away from difficult challenges like the departure of a parent or, I suppose, imminent death by scary black fog. The story and setting is unique and interesting—I love the touch of steampunk-type technology with the dam and its fog-busting fans—and the characters, while young, have plenty of agency as they set off on their quite possibly dangerous adventure. 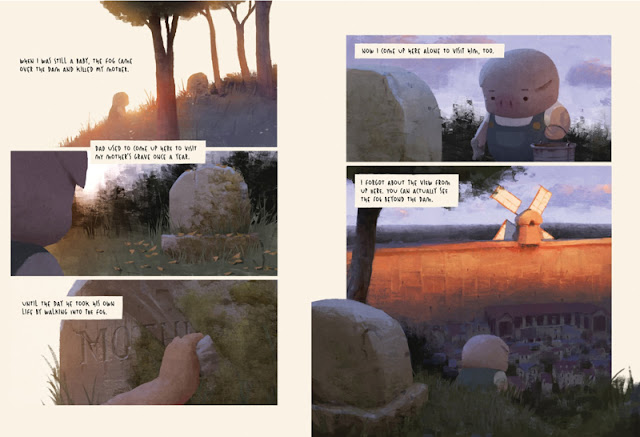 While the story and characters are fun and strange, they deal with a variety of familiar themes that are of interest to elementary-aged readers: friendship and friendship conflicts; understanding bullies (Hippo is obnoxious, but Fox is there to tamp down his bullying and bring out his better side); who is safe to trust; missing parents. The art (which is digitally done, I think) is really striking, though I’m not necessarily into this particular style of cute animals personally. The artistry in terms of panels and pages was amazing, as was the use of atmosphere in depicting the fog and the darkness.

Conclusion: I can see this appealing to a generation of readers who have grown up with the style of digital art that’s everywhere now—but it definitely transcends the mass-market stuff with its sense of artistry and intriguing story.

I received my copy of this book courtesy of my library. You can find THE DAM KEEPER by Robert Kondo and Dice Tsutsumi at an online e-tailer, or at a real life, independent bookstore near you!