No Kids in Cages

We don’t usually get overtly political over here, but there are times when it’s unavoidable. Times when something is so unconscionably, unimaginably WRONG that speaking out is not an option. Over the past few days we’ve seen the rights and well-being of migrant children, of “their” children, clearly articulated as less important than the rights and well-being of “our” children, doing irreparable damage to thousands as a result. Even with the promised incremental change to policy, kids have already been harmed, and it’s inexcusable. 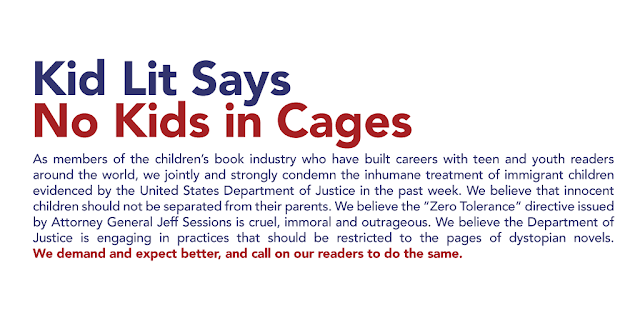 A vast swath of the kidlit community has come together in protest of this policy, publicly signing an open letter in opposition to the conditions under which these immigrant children are being held, and raising an incredible $173,533 so far for donation to Refugee and Immigrant Center for Education and Legal Services (RAICES) and a handful of other organizations providing services to immigrants and refugees at the border. You can read more and donate here.

The final thought I’d like to leave you with is this tweet from fellow author Carrie Jones: