Cybils YASF Finalist Review: The Ones We’re Meant to Find 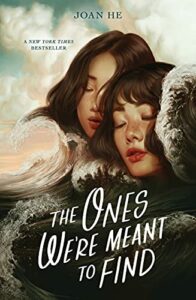 There was a lot I really liked about this book, which was one of the 2021 Cybils Award Finalists that I read as part of the Round 2 judging panel for Speculative Fiction. The Ones We’re Meant to Find by Joan He is a page-turning science fiction story that alternates points of view between Cee (Celia) and her sister Kay (Kasey) Mizuhara. Kay lives in a technologically advanced “eco-city” that towers above the chaotic world, which has been ravaged by climate change. The people who choose to live in eco-cities have clean air and water, but they’re required to spend large portions of their lives in stasis, and there’s still a massive difference between the haves and the have-nots.

Cee lives on a deserted island, her memory largely gone. All she knows is, she’s been there for three years, living in an abandoned house and subsisting on the bare minimum while she tries to build a boat to get back home to her sister. Meanwhile, for Kay, it’s been just three months since Cee disappeared, but retracing her steps to try to figure out what happened only leads to more questions.

I enjoyed the sci-fi setting and the mystery surrounding Cee’s situation—watching her grow as a character was intriguing, and the questions posed about what it means to both BE human and FEEL human were twisty and tense. But I was left feeling confused about a lot of what happened to Kay, and I also had some confusion about the intertwining timelines and storylines, so I didn’t feel as much closure as I could have at the end of the book. Your mileage may vary, though–and it was still a fascinating read.